Bear 50,000, a major milestone in Tambo Teddy land was created early in 2020. We held onto the tag for a bit to decide what would be the best thing to do with this significant bear.

Eventually, after a lot of discussion and suggestions we decided to donate him to the Royal Flying Doctor Service. Living in the Outback we are so fortunate to have the RFDS to assist with medical emergencies. The Royal Flying Doctor Service  is one of the largest and most comprehensive aeromedical organisations in the world, providing extensive primary health care and 24-hour emergency service to people over an area of 7.69 million square kilometres.

The RFDS relies on donations and support to keep flying and saving lives. Over the past 6 years we have had several bears purchased to raise funds for the RFDS. So when we were looking for a charity to donate Bear 50,000 to the RFDS was our choice. We decided to create a traditional honey Basil with suede paws and selected the softest skin available. A pilot’s cap was received and altered to ‘bear size’ to dress him up a bit.

Originally Bear 50,000 was to be auctioned at the 6th annual RFDS Wings for Life Gala planned for Saturday 18th July. A black tie signature fundraising event for the RFDS, held in Brisbane. The RFDS seek unique auction items from regional, rural and remote Queensland. The aim is to help support businesses in the bush and raise funds for the organisation. The theme for 2020 was to be ‘Australiana’ so Bear 50,000 was a good fit!

Bear 50,000 was duly dispatched to the RFDS base in Brisbane. Lynda Inglis, RFDS Partnership Coordinator, emailed to say ‘We ALL LOVE LOVE LOVE him!’
‘THANK YOU again, just gorgeous! He’s already given comfort in this unprecedented times, the world shines and we find joy in places we haven’t looked before!’

Unfortunately due to the advent of the COVID-19 pandemic, the gala event has been cancelled this year. The RFDS team are brainstorming how to best use Bear 50,000 to raise funds for the organisation. However Bear 50,000 couldn’t go through life without a name, so a naming competition was arranged and pushed out through social media channels.

Loads of entries were received and suggestions ranged from Dr Ted, Captain Flynn to Tim Tam. The RFDS team had a difficult time making the selection but eventually settled on Captain Charleville Moss. Named after Moss a lively little boy with a disability  who hails from the Outback town of Charleville. Moss has had a couple of trips to the city with the RFDS paediatric team. Super cuddly just like Bear 50,000 meant that Captain Charleville Moss won by popular vote.

We look forward to next adventures of Captain Charleville Moss to see how he will help ‘Keep the Royal Flying Doctor flying.’ 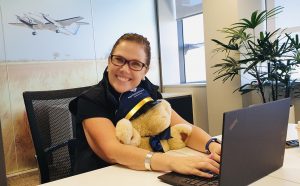 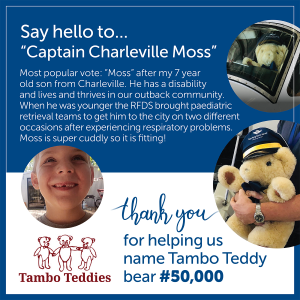