It really is about time we introduced our wonderful team in  our Toowoomba Hub! Our Toowoomba Team have been pumping out Tambo Teddies since February 2019.

Team Leader is Bonnie Hood, Bonnie was originally our off-site sewer in Toowoomba  in 2018. There were times when our shelves we so empty we were absolutely desperate for her bears to arrive on the bus. When we decided to open a sewing hub in Toowoomba we asked Bonnie if she would manage it.

Bonnie is very organised and pretty quickly had spreadsheets, tasks and systems in place to ensure the smooth management of  the Hub. No longer having time to sew, Bonnie’s aunt Laurissa Hastie took over her machine and continues to sew bears from home. 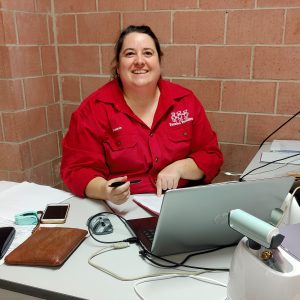 Bonnie’s right hand man (well, woman) in Toowoomba is Paula Hearn. Paula originally hails from Charleville and is a friend of Tammy’s family. When we started the Hub, Tammy’s mother suggested Paula might be interested in sewing. Paula is the mother of three boys who are now all grown up and settled, so it was time for Paula to re-enter the work force. Paula took on the role of sewer, and being a bit of a perfectionist found the initial days rather challenging. But with determination and perseverance Paula makes the most beautiful bears. These days Paula doesn’t do much sewing as she is kept busy packing orders, undertaking the Toowoomba customer service role and keeping Bonnie’s spreadsheets up to date. 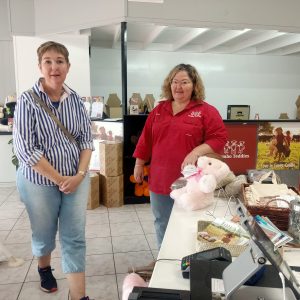 In-store in Toowoomba we have three sewers creating our beautiful Tambo Teddies.

Tbrah Ghebremedhin comes from Eritrea in Eastern Africa, a country that shares borders with Sudan, Ethiopia and the Red Sea. Tbrah arrived in Toowoomba in October 2018 to live with her sister. In Eritriea, Tbrah worked as a telecommunications accountant, a bit different to her role at Teddies. Tbrah took on the position of sewer in February 2019 when we opened the Hub, being a versatile worker she steps in and cut outs and trims bears when needed. Tbrah is married to Mulue who is currently studying English in Uganda. They met in Eritrea eight years ago and were married on the 12th January 2020, the couple hope Mulue will be able to immigrate to Australia soon. But until he can they talk every day on the phone, messenger or viber, and in her own words Trabh says she, ‘misses him so much’. 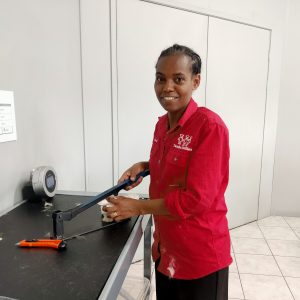 Dilo Maho comes from in North Syria, he left school in 2011 and moved to Instanbul in Turkey with his family. In Turkey Dilo started sewing fashion clothing as a holiday job before taking it up full time. He moved to Toowoomba in July 2018 with his Mother, Father, Grandfather and two sisters and one brother. He has another brother and sister in Germany, where his sister is married and his brother is doing a Masters in Philosophy. Dilo’s Australian siblings are all studying, in fact he is the only one in the family who isn’t a student. Dilo said he’s not studying because he ‘likes earning money’. 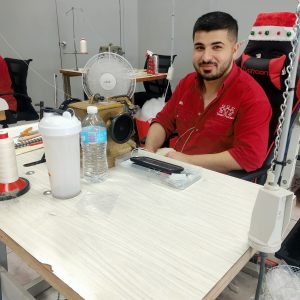 Also from Northern Syria, Kahlil Rash arrived in Australia via Kurdistan in August 2017 along with his wife, Evelyn and 7 month old baby son, Jan. In Kurdistan, Kahlil was cooking in a restaurant and before that he spent ten years as a tailor in Lebanon. Members of the Yezedi community in Toowoomba, Kahlil and Dilo met playing soccer. On his shirts and on social media Kahlil uses the name Abo Jan which literally means Father of Jan.

Tambo Teddies is the first job Kahlil has had in Australia, and he is very proud of his work. His wife Evelyn works at the Toowoomba High School for a former Tambo teacher and friend of Alison and Tammy. Since starting work at Teddies Kahlil and his family have been able to buy a house along with his brother, Waheed and his wife Rogine and their two children, Saheed and Janet. Kahlil says it is thanks to Tambo Teddies he has bought a house, we say it thanks to his hard work! 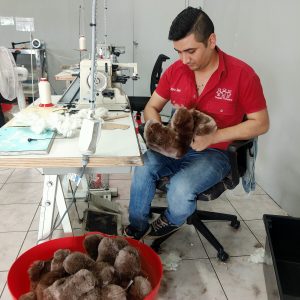 Our Toowoomba Team all work along well together creating and selling our beautiful Tambo Teddy bears.