All the bears came out to play at the 2019 Tambo Teddy Bears Picnic held on Saturday 21st September. Run by the Tambo Tourism and Business Association this year’s picnic was a fun-filled family day celebrating Teddy bears, our local icon. There was rock painting, teddy bear craft, face-painting, teddy bear parades, circus workshops and performances, games and of course fun with Big Ted.

For us the highlight of the day was the Tambo Teddy Roll Call. Over sixty Tambo Teddies came back to town to participate, travelling from across the State. Bears came from Emerald, Barcaldine, Rockhampton, Toowoomba as well as Cedarvale, Gleneagle and Brassall from near Brisbane. There was even one bear who visited from Bateman’s Bay in New South Wales.

Tambo Teddy collectors and enthusiasts alike were proud to display their bears. The Scurr family from down near Brisbane had the most Tambo Teddies with thirty bears between them. Having discovered Tambo Teddies only four years ago they have become avid collectors and are aiming to have one in every colour. Mother, Glenda’s bears are in pristine condition as they are displayed in glass cabinets. After this latest Tambo trip and a few new bears joining the family there is now a need for another cabinet! Fiona Scurr works in childcare, she dresses her bears in different themes and to narrate different story lines. There is Bob the builder, Jamie the chef, the fisherman, the princess, the gardener and of course a super hero.

Travelling from Barcaldine, Carl O’Neill, has been a collector of Tambo Teddies since the early days, his first bear was number 667. Made in around 1994 or 1995, Byrgenna Banjo was purchased at the Barcaldine Show. Complete with his original bear-as-a-bone, moleskins and swag he is also adorned with a hand crafted silver Tambo teddy pin. Carl has fourteen Tambo Teddies including his travel mate Trumby who has had a myriad of adventures including losing an eye. Continuing to be a great supporter, Carl regularly purchases bears as gifts, although not all get given away!

Julie Anderson made the journey from Rockhampton with her trolley full of Tambo Teddies. Dressed in beautifully hand made outfits Julie’s bears could have had a fashion parade all of their own. ‘Adopting’ Tambo Teddies when they are no longer wanted is becoming a passion for Julie. Her adopted bears most certainly land on their feet.

Jennie Hapgood travelled from Bateman’s Bay with Jabinda Jimmy. Jimmy has a very ‘lived-in’ look and could be considered a bit ‘thread-bare’ in places. A well loved adventurer, Jimmy was purchased twenty-four years ago when Jennie headed to Winton for the Waltzing Matilda centenary in 1995. A seasoned traveller, he’s been in submarines, up in helicopters, travelled on trains, steam trains, down mines, been on cruises. Jabinda Jimmy has been everywhere all over Australia – he loves Australia- he is in the car nearly every day.

The oldest bear to make an appearance was number 268, Gartmore Gus owned by Julie Birchley from Gartmore. Gus was given to Julie by her husband Richard before they were married – it seems a Tambo Teddy might have been what sealed the deal and encouraged Julie to say ‘I do’.

Former owner Mary Sutherland and (semi) retired sewer Verna Krukow were invited to present all the bears (and owners) with a gift bag. Odds on that Mary or Verna would have made the bears that rolled up on the day and it was great to see them catch up with their creations. Little Lara Abel from Tambo joined the roll call with her bear that Mary had made and given her when she was born.

Tambo Teddies are very special bears and the roll call at the picnic emphasised to us just how important teddy bears are to their owners and to our town of Tambo. 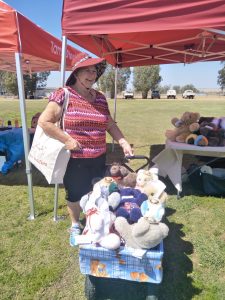 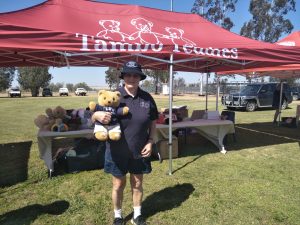 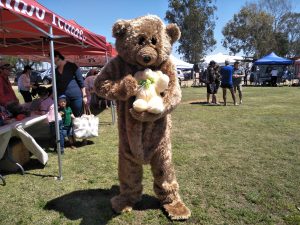 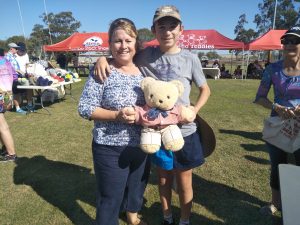 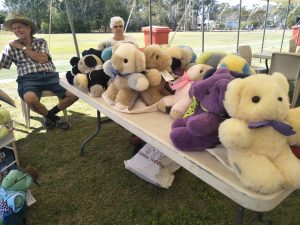 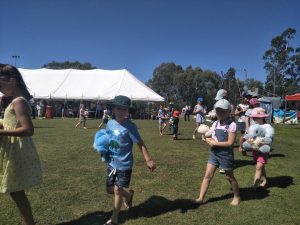